A new era has started for the food processing industry.
​
MADO’S EXTRUSION GRINDER is a revolutionary invention, reducing three machine processes into one machine.Cutting, mixing and homogenization are all accomplished within this single unit, saving capital costs, reducing processing time and eliminating the transfer of product from one machine to another.

For even better production results and more specialized applications, the new MADO EXTRUSION GRINDER can also be supplied with an optional vacuum device. Mixing under vacuum improves protein extraction and shortens the reddening time of the products.
Another benefit of MADO’S EXTRUSION GRINDER is this machine’s significant improvement in hygiene levels as well as the commensurate reduction and simplification of cleaning the machine: rather than three machines to supply electricity to, manage (man power), maintain, clean and provide floor space for, MADO’S EXTRUSION GRINDER truly does it all in one machine for a fraction of the cost.

​Standing still means going backwards. If you don’t challenge yourself, then don’t be surprised when you start to lose market shares. This applies to the cold cuts and sausage meat section of the food production industry just as much as it does to other sectors. MADO has analysed the meat processing industry, surveyed opinion on the manufacture of cold cuts and sausage meat, noted down requests and suggestions, and spent years developing a system that will revolutionize the market – in terms of both performance and results.

Daniel Dimitrov
​In general, the traditional method of producing sausages, grilled goods and hamburgers is still based on using up to three machines.


The cost of the machines comes not just from procurement, but also from the space, cleaning work and energy consumption they require. Personnel costs also need to be taken into account. What is more, tests show that interruptions caused to the production process by the delivery of individual solutions from machine to machine impairs the product quality and increases the chances of contamination during production.

An expert team that likes a challenge

Three problems need to be solved:
What makes more sense than combining the jobs of 3 machines in one? Nothing! It’s simply a question of finding space for the technology. As with any progressive development, this requires intelligence. MADO’s designers have succeeded in developing a system that combines the processes of cutting, mixing and homogenization in one machine using the minimum of space (see Figure 1). There is no longer any need to transport the production goods from one machine to another, which is undoubtedly an improvement in the production process. The work process is not
interrupted. Another benefit of this is that the chance
of the product being infected with germs is reduced by up to 80%. 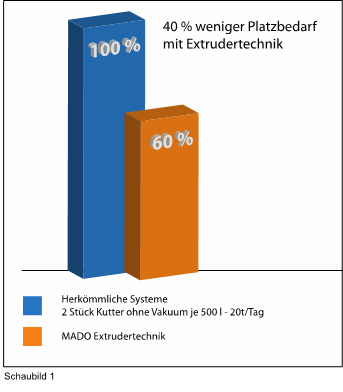 ​The mixing equipment can be adjusted to suit the individual product (mixing times, mixing intervals, breaks). The patented twin cutting system (Figure 3) pre-chops the processed goods as gently as possible. The material is then homogenized with individually combined 3 to 7-piece cutting systems and minced to the desired  final grain size.
Depending on which product you wish to produce, we recommend an excellent cross-section and minimal temperature increase.  The ∆-t when processing pork meat and using a 3 mm perforated plate is only 0.5° C. Two feed screw conveyors which work towards the inside ensure continuous conveying of material to the processing screw. The continuously variable control on the mixing equipment allows you to blend ingredients with the processed goods both efficiently and sparingly. using the MADO
emulsification attachment. The patented mixing screw (Figure 4) has a return flow opening to allow optimum blending of the processed goods with the seasoning and ingredients.

On request, the system can be equipped with the Duo - separating system. This device sorts out gristle and tendons with the highest possible efficiency. This allows you to do reduce costs by avoiding processes that contaminate the material, e.g. removal of tendons on a belt. The Duo - separating system system comprises two independently operating separating devices. In the first separating stage, the separated material is ejected to the side. In the second stage, on the perforated end plate, the material is ejected from the center. The pilot valve for the side separating system is operated pneumatically, and is continuously adjustable. The central screw conveyor separation system has an electric drive, and is also continuously adjustable. Depending on the product, the proportion of tendons and gristle can be reduced by up to 80%. The system has a large, high-clarity, splash-proof touch screen. All information is entered and read centrally. The system can save up to 99 individual program sequences.

​
Technology has its limits

Any technology is only as good as the benefits it offers the user. The Hellriegel Institute at the University of Anhalt in Germany scientifically observed a series of tests on hamburger manufacturing. The results of these lab tests and the positive sensory feedback justified modern use of the EXTRUDERWOLF system.

The pre-ground material (16 mm fresh meat and 18 mm frozen meat) was fed together into the funnel of the meat grinder. The material was then standardized in the machine’s funnel. Weighing cells made it possible to check the weight in the machine at any given time. Just 180 seconds of using the mixing equipment produced a relatively homogeneous mass for which standard machines would usually need 600 seconds. The adhesion of the mass was also improved by
mixing it in a vacuum. In the final mincing stage, the material was fed through a 2.5 mm perforated end plate. The recorded volume for this process came out at 12 tons per hour. While a higher concentration of connective tissue in other systems resulted in the hamburger losing their shape during cooking, ​the DuoSepart separation system reduces the amount of connective tissue in the material. The final results showed that the hamburger patties produced by the extruder were softer than those made using the traditional method. Less meat was lost during cooking of the hamburger. The texture of this hamburger was pleasantly grainy and incredibly juicy.

Increased output. Increased product quality. Reduced costs. The leading European meat processors use extruder technology under real conditions in their day-to-day production. The example calculation below is not only impressive – it’s also proven. 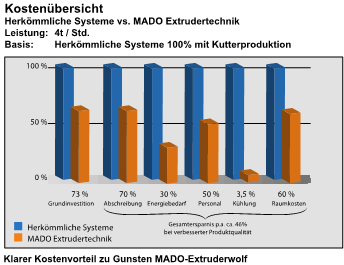